Sign our Petition and Send a Submission - No Nuclear Waste Dump in SA!

Federal Minister Matt Canavan announced that an AEC community vote for a planned waste dump and store would begin on August 20th. This was despite the fact that there was a Senate Inquiry examining the flawed and divisive site selection process. The Minister has not clarified what constitutes ‘broad community support’ despite repeated community requests.

Conservation SA and the No Dump Alliance have launched a postcard campaign and petition to Minister Canavan.  Please sign the petition here.

Many affected people are ineligible to vote, including Traditional Owners who live outside the ballot area. The Barngarla People applied to the Supreme Court for an injunction on the vote, and the ballot is currently on hold in both regions pending the court decision.

You can still have your say, regardless of where you live, by sending a submission to the Department of Innovation, Industry and Science (DIIS).  Details and some useful information to include can be found here.  You can write your own submission, or use our quick and easy online submission system here.

On 6 February 2018, the Senate referred an inquiry into the selection process for a national radioactive waste management facility in South Australia to the Senate Economics References Committee for inquiry and report by 14 August 2018. Read our submission here. Read all submissions on the government website here.

The report acknowledged and validated many of the concerns about the process but unfortunately did not call for an end to the process and for a better way to manage the process of selecting a site for Australia’s most hazardous waste.  You can read the Senate report here. Read the Conservation SA media release here.

Amidst rising controversy, the Federal Industry Department (DIIS) has named proposed Ports in SA that may have to take shipments of irradiated nuclear fuel wastes to go on to a Federal dump site. The communities of these port towns have not been consulted. Read more in this briefing paper by independent environmental campaigner David Noonan.

Radioactive waste management in Australia has been a contested, divisive and ultimately non-productive area of public policy for decades. The timing and circumstances are now conducive for adopting a revised approach that is more likely to advance responsible national radioactive waste management and agreed and lasting outcomes.  This approach to responsible radioactive waste management in Australia is founded on not imposing any federal facility on an unwilling community, acting in a manner consistent with both existing state and territory laws and leading international industry practise and ensuring high standards of extended federal interim storage at the two secured sites where the majority of the waste is sited pending an inclusive and robust examination of the range of long term future management options. Read more in our briefing paper, written in conjunction with the Australian Conservation Foundation, here.

Peace Boat, a Japanese based global NGO, visited Adelaide on 29 January for the first time as part of a speaking tour featuring nuclear survivors from Japan and Australia on it’s 93rd global voyage. The visit was designed to put pressure on the Japanese and Australian Governments who have not yet signed the new UN Treaty on the Prohibition of Nuclear Weapons. People affected by the nuclear industry and survivors of South Australia’s nuclear bomb tests travelled to Port Adelaide to take part in this cultural exchange. Read the Peace Boat 2018 write up here

Music and Art Campaign to stop the Dump

The Friends of the Flinders Ranges are running an awareness building music and art campaign.  Click here for more information and to download or request resources

On 7th June 2017 Conservation SA strongly welcomed the announcement from Premier Weatherill that he now considers the international high level nuclear waste dump is dead, vowing that Labor will not revisit if after the next state election. This is wonderful for South Australia, however our State still faces the prospect of a Federal low and intermediate radioactive waste dump.

Click here for a background on the successful campaign to stop the importation of international high level radioactive waste to South Australia.

Read on to find out about the current Federal proposal to build a low and intermediate level waste facility in either the Flinders Ranges or in Kimba, SA.

The Federal government wants to build a nuclear waste ‘facility’ in SA. Some of this nuclear waste is a hazard for hundreds of years and some for over ten thousand years.

We continue to say no to a nuclear waste dump in our state.

THIS IS NOT JUST A LOW LEVEL WASTE DUMP.

The proposed dump would store intermediate level nuclear waste, not dispose of it. The long-lived intermediate-level waste would be stored above ground as an ‘interim’ measure until being moved again for deep underground disposal. The federal government has no plans for permanent disposal of the long-lived intermediate-level waste, so ‘interim’ above-ground storage in SA could stretch to 100 years or more.
The long-lived intermediate waste is the highest level radioactive waste in Australia and in some international jurisdictions, including France, is classified as high level radioactive waste. This waste includes reprocessed nuclear fuel rods and is a serious threat for thousands of years. Measured by radioactivity the long lived waste is more than 90% of the nuclear waste in Australia
Low-level waste would be permanently disposed of at the dump site. The majority of the low level waste is contaminated soil.

COMMUNITY CONCERN IN THE FLINDERS RANGES AND KIMBA.
Many locals don’t want industries such as tourism and farming threatened. Many Traditional Owners do not want cultural heritage sites and their spiritual connection to country put at risk. South Australians do not want their state turned into a nuclear dump. The issue continues to cause deep division and stress in the affected communities.

WHAT SHOULD HAPPEN TO THE WASTE?
The majority of this waste is currently securely stored at the Australian Nuclear Science and Technology Organisation’s (ANSTO) site at Lucas Heights, in southern Sydney. ANSTO says it “is capable of handling and storing waste for long periods of time.” ANSTO produced the waste and they are best placed to manage it until proper disposal is agreed. The current plan is substandard. There is no rush.
The waste can and should remain secured and monitored at Lucas Heights until a dedicated public review of the full range of options for waste management is carried out. The focus needs to shift from targeting SA to establishing a fair, open and responsible process.

NUCLEAR WASTE DUMPS ARE ILLEGAL IN SA.
In response to earlier federal moves to dump radioactive waste in SA our Parliament passed the Nuclear Waste Facility (Prohibition) Act 2000. The objects of this Act are “to protect the health, safety and welfare of the people of South Australia and to protect the environment in which they live by prohibiting the establishment of certain nuclear waste storage facilities in this state.” This law is sensible and powerful and we want all our state politicians to use it to stop the federal government imposing a nuclear waste dump on SA.

WE HAVE SAID NO BEFORE AND WE STILL SAY NO.
South Australians said no the last time (1998-2004) the federal government wanted to build a nuclear waste dump and more recently we said no to the plan to import high-level international nuclear waste.

Together we can build a better, greener future from safer things than nuclear waste!

WHAT YOU CAN DO

Phone or write to your local MP. Find their contact details here: http://www.parliament.sa.gov.au/Members/Pages/List%20of%20All%20Members.aspx 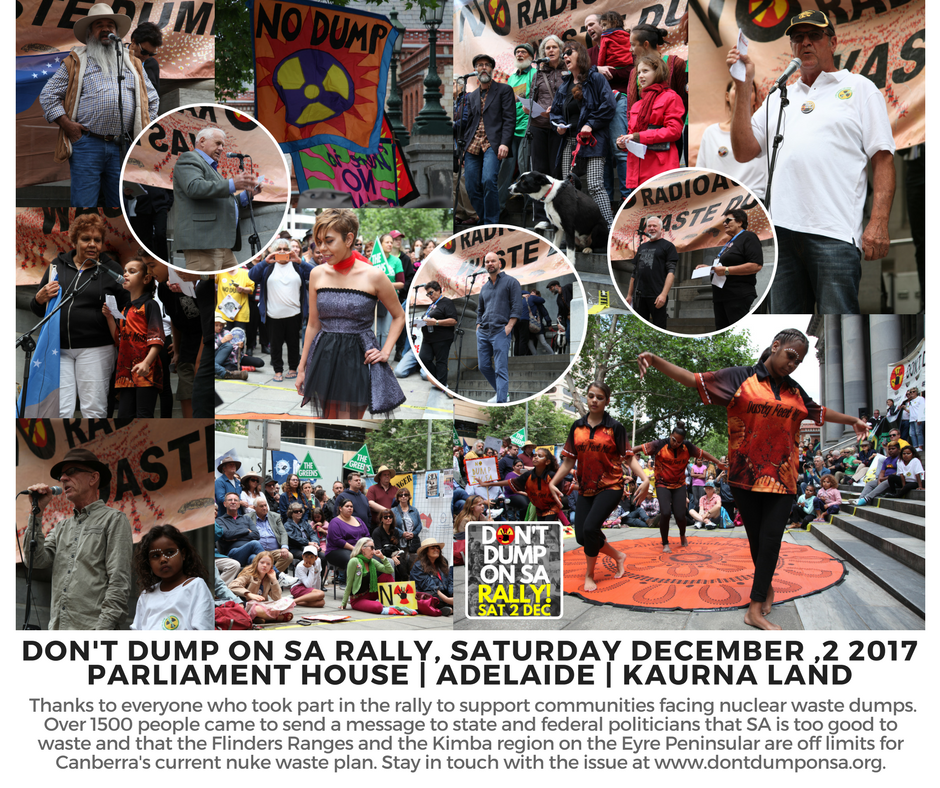 On Saturday 2nd December, speakers and residents travelled hundreds of kilometres from Kimba on the Eyre Peninsula and the iconic Flinders Ranges to attend the Don’t Dump on SA rally. They were joined by 1500 other South Australians at Parliament House to highlight concerns over federal government radioactive waste dump plans.

Paper on Nuclear Medicine by MAPW, the Medical Association for the Prevention of War

The Flinders Local Action Group (FLAG) initiated this spectacular 3.5 minute film to show the breadth and depth of opposition to the waste dump. We Say No: https://www.youtube.com/watch?v=CFtlVBCIXHA

Journalist Timothy Larges from Reuters International visited Yappala in the Flinders Ranges last year and made this documentary film which was recently screened at the Berlin Film Festival: https://www.youtube.com/watch?v=4Gpt46ofCXs

AEU film showing South Australia saying NO to nuclear waste dumps!  https://www.youtube.com/watch?v=XI4TzWH-ILs. 3,000 plus rallied outside Parliament House in Adelaide on October 15, 2016 to express their strong and unrelenting opposition to proposals for nuclear waste dumps in SA!

This is a short documentary about the proposed nuclear waste dump in the Flinders Ranges in South Australia, located on traditional aboriginal land. The Adnyamathanha and local communities are expressing their concerns and telling us why this should not be imposed on them. It was filmed by some french tourists who were in the area and horrified to learn what was proposed so took it upon themselves to make this great film. By Alexis Charles.  https://www.youtube.com/watch?v=XEbRwGVFEIo