On 7th June 2017 Conservation SA strongly welcomed the announcement from Premier Weatherill that he now considers the international high level nuclear waste dump is dead, vowing that Labor will not revisit if after the next state election. 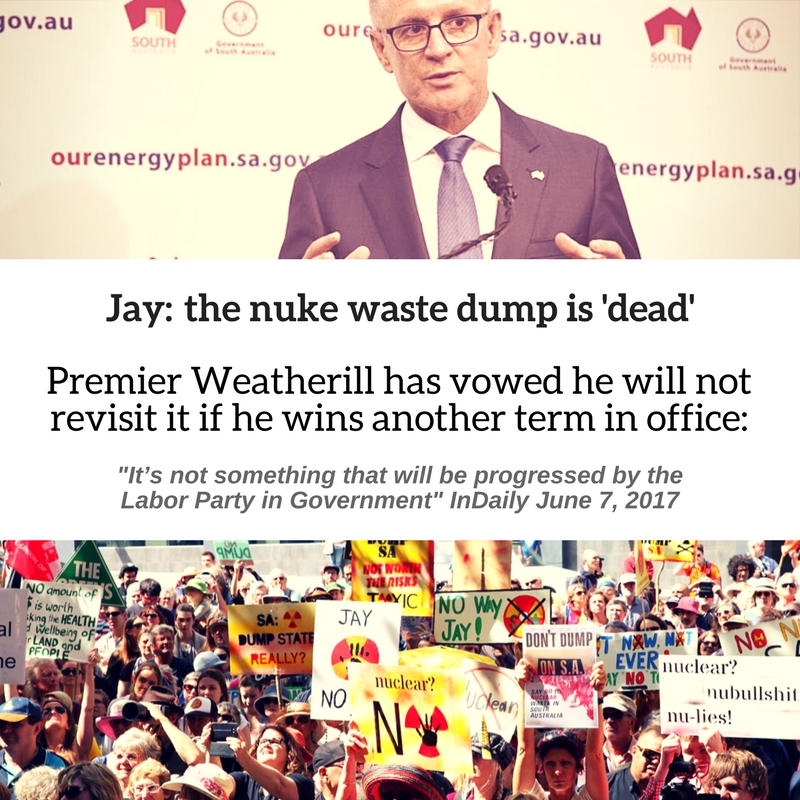 On Sunday 6th November 2016, two-thirds of the 350 members of a South Australian government-initiated Citizens' Jury rejected "under any circumstances" the government's plan to import 138,000 tonnes of high-level nuclear waste and 390,000 cubic metres of intermediate-level nuclear waste as a money-making venture.

The Jury was a key plank of the government's attempt to manufacture support for the dump plan, and followed the SA Nuclear Fuel Cycle Royal Commission which released its final report in May 2016.

The Royal Commission completely rejected the proposal, noting in its report

“We are glad that Jay has opened his ears and listened to the community of South Australia who has worked hard to be heard on this matter. We know nuclear is not the answer for our lands and people.– we have always said NO." outlined Yankunytjatjara Native Title Aboriginal Corporation Chair and No Dump Alliance spokesperson Karina Lester ahead of her trip to New York for UN nuclear weapon ban treaty negotiations.

The Citizens' Jury gave a clear 'no' verdict to the Premier's plan to turn SA into the world's high-level nuclear waste dump. Aboriginal communities across the state have repeatedly voiced their strong opposition to the proposed nuclear dump.

The Premier should now turn his attention to the Federal Government's plan to impose a national nuclear waste dump in the iconic Flinders Ranges or in Kimba in the Eyre Peninsula.

Karina Lester, chairperson of Yankunytjatjara Native Title Aboriginal Corporation, said: "This is a strong decision from randomly selected and very diverse group of South Australians who have had the benefit of studying the Royal Commission Report and hearing information from experts in various aspects of the proposal. It was positive to hear the jurors acknowledging the need for Traditional Owners' voices to be heard. I thank the clear majority of Jurors for this decision."

The Citizens' Jury report said: "There is a lack of Aboriginal consent. We believe that the government should accept that the Elders have said NO and stop ignoring their opinions. The Aboriginal people of South Australia (and Australia) continue to be neglected and ignored by all levels of government instead of respected and treated as equals. Many Aboriginal communities have made it clear they strongly oppose the issue and it is morally wrong to ignore their wishes. ... Jay Weatherill said that without the consent of traditional owners of the land 'it wouldn't happen'. It is unethical to backtrack on this statement without losing authenticity in the engagement process."

ABORIGINAL WITNESSES SPEAK 'STRAIGHT OUT' TO THE CITIZENS' JURY
As part of the State Government's community consultation process the Citizens' Jury, made up of 350 South Australians, heard testimonies from over 20 Traditional Owners from around SA during a two hour session.

The session started with a short video 'Poison', following the Kupa Piti Kungka Tjuta and the successful Irati Wanti campaign. Recently deceased atomic test survivor, Yami Lester, recorded a short and strong statement from his home at Walatina. One after the other individuals representing their communities all over South Australia stood up, and spoke straight out.

This session was testimony to the strength and power of Aboriginal people from all over SA, and their commitment to work together to stop nuclear waste dumping on their land.

During the morning session the jury heard some very critical presentations on economics, consent, safety issues. You can watch them here.

On 7th June 2017 Conservation SA strongly welcomed the announcement from Premier Weatherill that he now considers the international high level nuclear waste dump is dead, vowing that Labor will not revisit if after the next state election. This is wonderful for South Australia, however our State still faces the prospect of a Federal low and intermediate radioactive waste dump.

This is a win for all the many South Australians who stood up and demanded a better option for our state than as a home for the world’s radioactive waste. Our state’s clean and green reputation is an enormous asset. With our world-leadership in waste management and renewable energy, as well as our beautiful wild spaces under the seas and on land we have so much to celebrate. We now look forward to the Premier standing up for the people in Kimba and the Flinders Ranges fighting against the Turnbull Government’s push to impose radioactive waste from Sydney’s Lucas Height’s reactor onto their communities.

AEU film featuring Karina Lester https://www.youtube.com/watch?v=iILHwdyUqjU Karina Lester is the daughter of Yami Lester, Aboriginal Elder, who was blinded by the British nuclear tests in the 50s and 60s. Karina called on all South Australians to stand up for SA and rally on October 15, 2016 against the Weatherill government's proposed nuclear waste dump.