Peace Boat, a Japan-based global NGO, visited Adelaide on 29 January for the first time as part of a speaking tour featuring nuclear survivors from Japan and Australia on its 93rd global voyage. 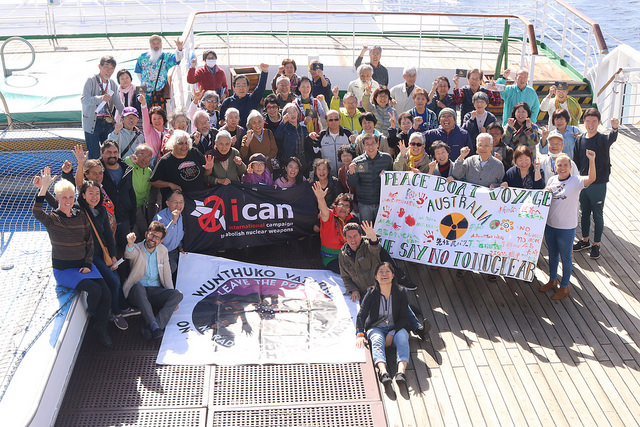 The visit was designed to put pressure on the Japanese and Australian Governments who have not yet signed the new UN Treaty on the Prohibition of Nuclear Weapons.

People affected by the nuclear industry and survivors of South Australia’s nuclear bomb tests travelled to Port Adelaide to take part in this cultural exchange.

Conservation SA was proud to partner with 2017 Nobel Peace Prize laureate ICAN (the International Campaign to Abolish Nuclear weapons), the Maritime Union of Australia, and winner of the Governor’s Award The Graham F Smith Peace Foundation to host the Adelaide part of the trip.

The day’s events included a press conference and boat tour at the Port Adelaide Passenger Terminal, with speakers including Port Adelaide MP Susan Close, Mayor Gary Johanson, and Peace Boat and ICAN representatives. There was a Welcome to Country and special performance by Tal-kin-jeri Dance Group.

A closed testimonial session followed, giving Japanese and Australian nuclear survivors an opportunity to share their stories and experiences with each other.

Finally, a public event was held at Gallery Yampu in Birkenhead before the ship sailed to Melbourne on the next leg of its journey.

Japanese speakers included Mr Hasegawa Kenichi, a dairy farmer from Idate village which was exposed to high levels of radiation following the Fukushima disaster. Also speaking was Mr Tanaka Terumi who survived the atomic bombing of Nagasaki. The blast centre was 3.2 kilometres from his house.

The people of Japan and Australia have experienced the impacts of the nuclear fuel chain, from the tragic bombings of Hiroshima and Nagasaki, to nuclear testing on Aboriginal land in South Australia, uranium mining and radioactive contamination following the Fukushima reactor meltdown.

The NGO carries out its main activities through a chartered passenger ship that travels the world on peace voyages. The ship creates a neutral, mobile space and enables people to engage across borders in dialogue and mutual cooperation at sea, and in the ports that it visits.