Don't Dump on SA Rally
On Saturday, 3 November about 1,000 people gathered at Parliament House in Adelaide for the ‘Don’t Dump on SA – We Still Say No to Nuclear Waste’ rally. 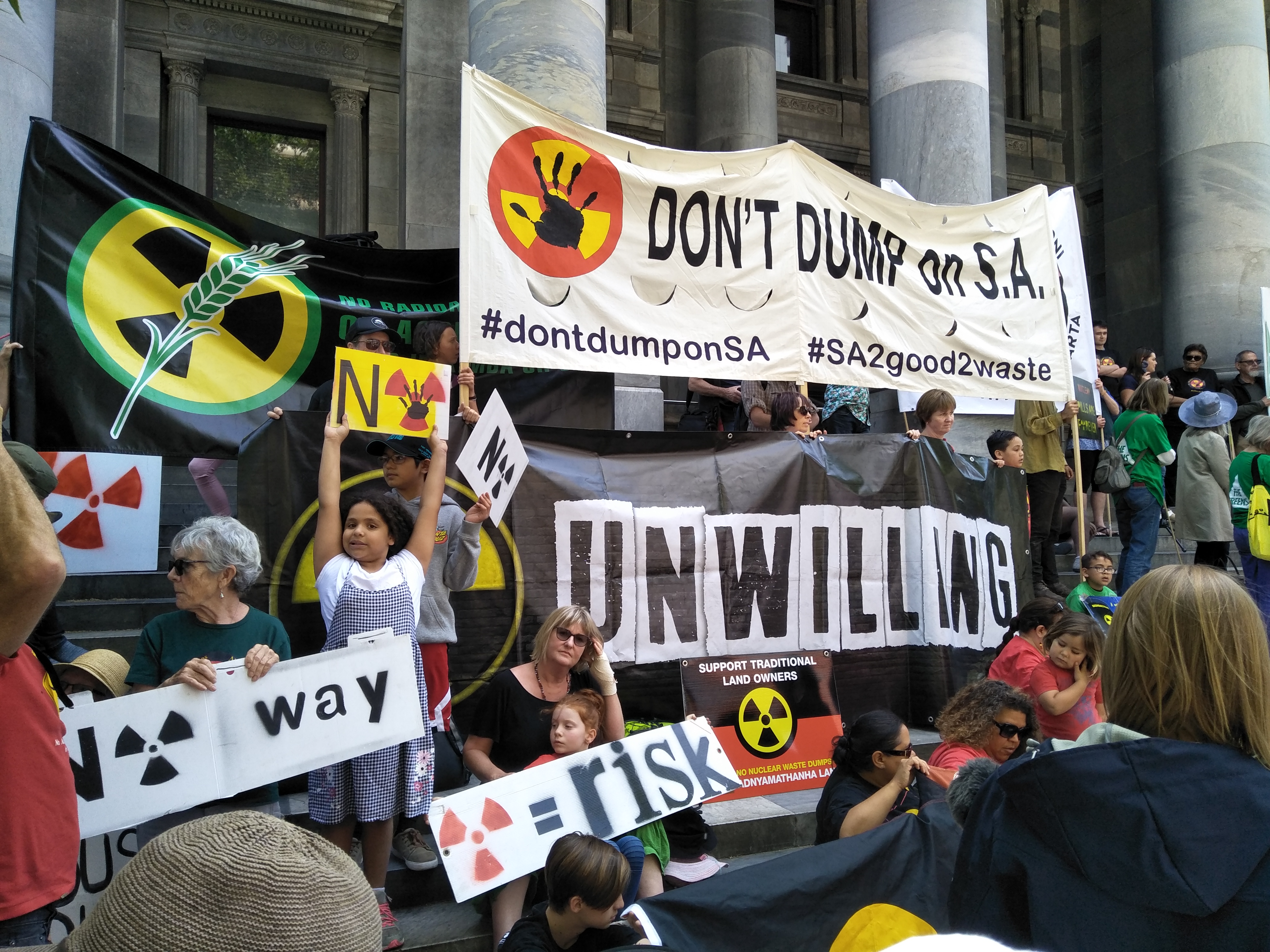 With the ballot to gauge public opinion on hold due to the court injunction sought by the Barngarla Determination Aboriginal Corporation (BDAC), the rally was held to send a clear message to the Federal Government to abandon the current abysmal site selection process and to the SA government to uphold state legislation that makes radioactive waste facilities illegal.

People travelled from the affected communities of Kimba on the Eyre Peninsula and the Flinders Ranges to join other South Australians concerned about the issue for a vibrant and colourful event of speakers and performers.

Eyre Peninsula resident Anna Taylor asked the crowd, “Why would you put radioactive waste in the middle of our food bowl when only 4% of our country is productive land?”

Adnyamathanha man Dwayne Coulthard said, “This process by the Federal Government is cultural genocide. We have had enough of being ignored. No radioactive waste dump on Adnyamathanha country in the Flinders Ranges. No waste dump in Kimba.”

Dr Margie Beavis from the Medical Association for Prevention of War (MAPW) dispelled government scare-mongering linking the practice of nuclear medicine to its dump plans. Nuclear medicine has not been hindered by the absence of a national dump nor will it be helped by the establishment of a dump.

President of SA Unions Jamie Newlyn said, “Minister Canavan came out recently and identified Whyalla, Port Pirie and Port Lincoln as areas where they could bring in nuclear waste. Those port communities in that logistics chain were all stunned by that announcement. The mayors of all of those communities are surprised that the announcement was made without any consultation.

"We’re talking about this toxic, horrible nuclear waste coming through ports and across supply chains, across our boat links, across our highways and through our ports, that then it has to travel hours and hours by road or rail to a final destination, and those communities don’t get a say either? That is a disgrace.”

Contact your ALP members to say 'no waste dump'

The Labor Party have their national conference in Adelaide in mid December. With a federal election just around the corner, we want as many people as possible to contact them to urge them to adopt a strong policy on radioactive waste management.  Conservation SA has set up an online lobbying tool.  Just enter your postcode and it will automatically send an email to your ALP members.  You can use the existing text, or edit to suit.  Alternatively, you can call your ALP members.

If you haven't already, please send in submissions to the federal Department of Industry, Innovation and Science opposing the dump, sign our petition to Minister Canavan, encourage everyone you know to do the same.