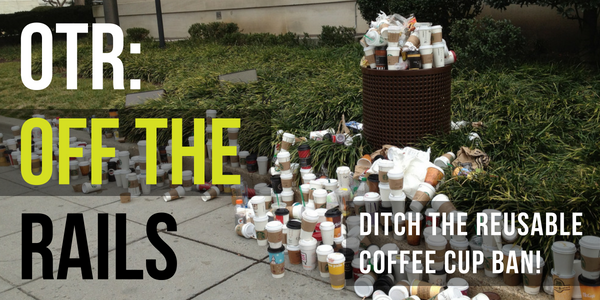 A staggering one million coffee cups end up in landfill every minute, creating a massive mountain of waste that simply doesn’t break down, contaminates recycling, and creates a major pollution hazard that can end up in our oceans.

Many coffee lovers are starting to bring their own cup to grab their morning pick-me-up. Coffee drinkers want to do the right thing by the planet, and most baristas are happy to oblige.

So, it’s bizarre that On the Run has decided to ban re-usable coffee cups from their 100 stations across Adelaide.

Our state has an awesome reputation for doing the right thing around waste, through banning plastic bags and the 10c deposit on cans and bottles.

Half of the world’s plastic goes into products that are used only once, like disposable coffee cups. We can turn this around, one coffee cup at a time.

On The Run: please allow people to bring their own coffee cup!