This report assesses what other jurisdictions across Australia’s metropolitan cities do to protect their urban forest and establishes best practice, with a particular focus on areas of similar climate, urbanisation and population density. 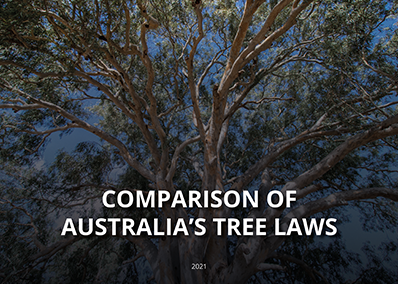 The State Planning Commission’s most recent report card assessing our progress against the 30-Year Plan for Greater Adelaide found that metropolitan Adelaide is not on track to meet its tree canopy goals. Yet there is a wealth of evidence to show that higher levels of canopy cover are linked to cooler day and night time temperatures, higher property prices, lower energy bills and better health outcomes.

When compared with other jurisdictions that protect trees on private land, metropolitan Adelaide has the worst tree protections in Australia. There is an astounding disparity between our protections and those of the vast majority of jurisdictions assessed in this report.

The ACT is the only jurisdiction other than SA where the protection of trees and vegetation is not delegated to local councils. While South Australian councils are left with the responsibility for maintaining tree canopy cover, they do not set the rules and so are unable to ensure that these protections meet the expectations of their local community.

Our tree protections were fundamentally undermined by myriad regulation exemptions introduced in 2011, which permitted the unnecessary removal of large trees based on their proximity to a dwelling. Only 3 out of 40 interstate jurisdictions that protect trees on private land allow for such removals without application.

Adelaide is the capital of the driest state on the driest continent in the world. We also have some of the lowest levels of tree canopy coverage of any metropolitan city in Australia. Compared with other metropolitan cities, Adelaide also has the lowest percentage of parkland (approximately 10%), compared with 57% in Sydney, 40% in Perth, 22% in Hobart and 20% in Melbourne. This significantly limits our ability to increase tree canopy using public land.

With rising temperatures and smaller backyards further increasing the difficulty of replacing large trees and growing new urban forest, the protection of what remains of our urban forest on private land becomes even more important.

There is an urgent need for South Australia to adopt best practice tree protections for private land.

We must act today to stop the decline of our urban forest.